Design a site like this with WordPress.com
Get started
Skip to content
fayrobepicjourney Uncategorized April 16, 2019October 24, 2021 4 Minutes

Best part of the day: Being able to sleep in and taking our time getting ready for today’s ride

Worst part of the day: The strong crosswinds and stronger gusts

It was nice to not have to get up too early this morning even though we just are in the habit of getting up around 6am. We were able to take our time getting our things assembled. Peggy and Jerry went to the restaurant for breakfast, they reported good food and service, before returning to get their bikes reloaded. While they were away, Rob was able to FINALLY post the blogs days 9 and 10, while having breakfast in the room. The two of us then packed up the panniers on our bikes and we all were ready to roll at 9.

The start of today’s ride immediately hit us with a couple of not too long climbs, but, enough to get our legs warmed up in a hurry! The winds were light at the start and a bit from behind us (that would not last too long, though). The next several miles were a gradual downhill bringing us to the Grand Canyon Caverns, a little tour and cave exploring spot with a small motel & tenting options with breakfast included, and, a convenience store. Had we gone the almost 12 additional miles after Hualapai Lodge, we could’ve stayed here at a much less cost, but, it was nice to have the jacuzzi and less miles considering the wind we had yesterday. 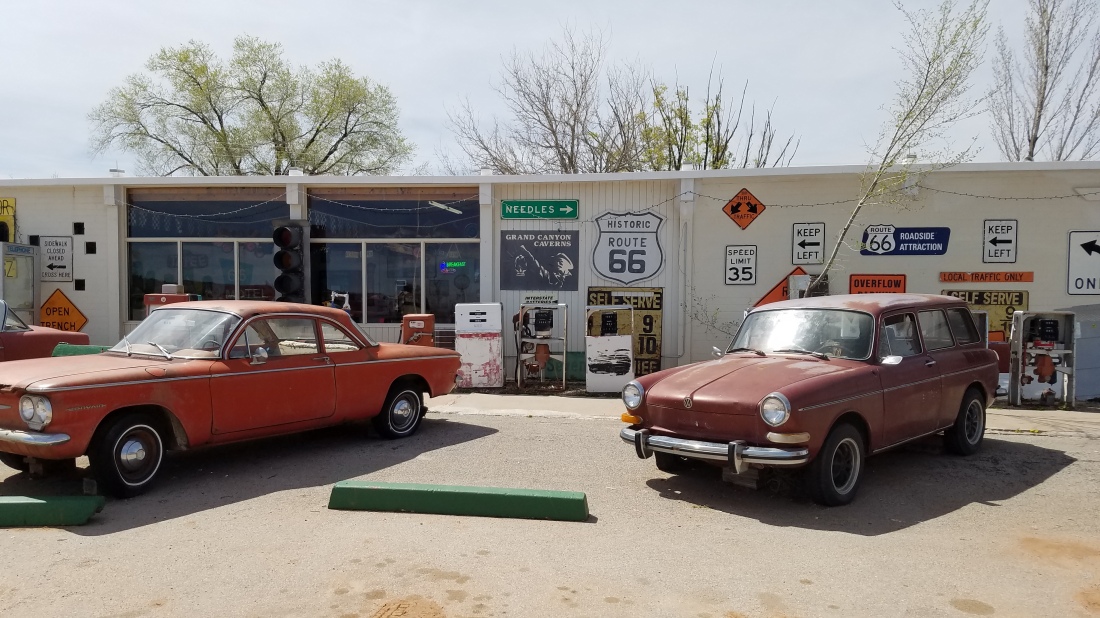 Back on the road, it was up and over an easy hill. The crosswinds by this time had really picked up to the point where the two of us removed our “da Brims” because our heads getting blown around!!

About 5-6 miles down the road, we saw another touring cyclist headed in the opposite direction! He crossed the road to our side upon seeing us and we stopped to chat with him. Steve James was the gentleman’s name and he said that he was surprised that we stopped because he had encountered other cyclists who just rode right on by him and thought we might do the same. Nope!! He told us that he started in Michigan last September and is looking to circle the globe!! Wow!! While we were chatting, there was a real big gust that almost knocked Fay over it was that strong!! Soon, we said are farewells and good lucks and continued on our respective journeys. 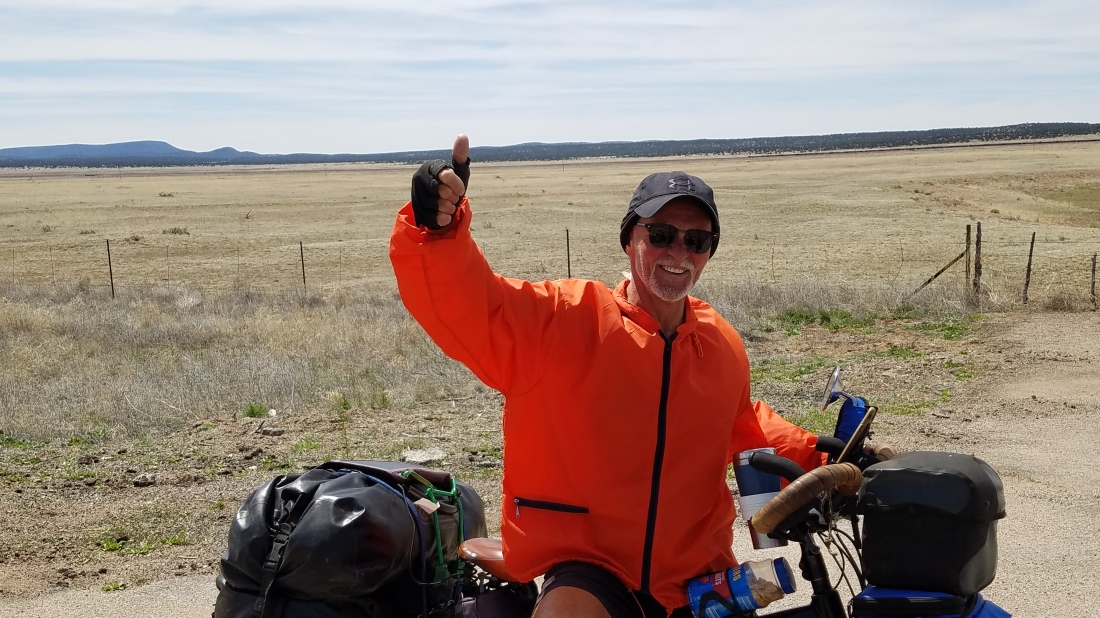 Now, we started seeing small groups of signs alongside the roadway that ended Burma Shave! Rob remembered something like that from the TV show M*A*S*H. Each 5-sign grouping had the first four displayed a line of a humorous jingle and the last was “Burma Shave”. Most of these “jingles” were meant to get drivers to slow down and be safe. You can Google “Burma Shave” to learn more about it these signs. 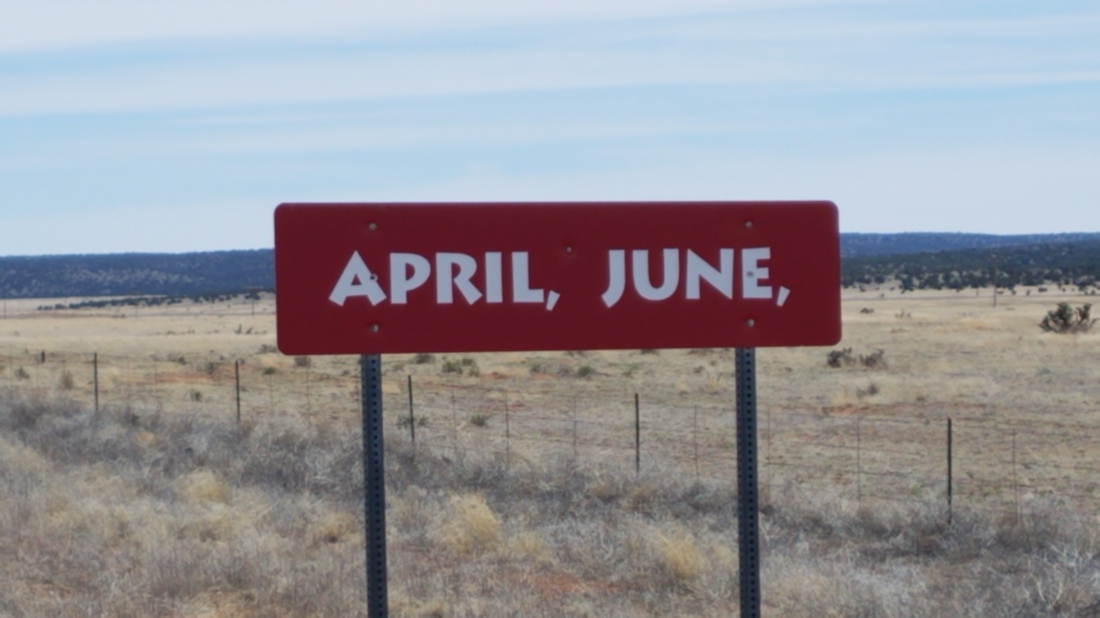 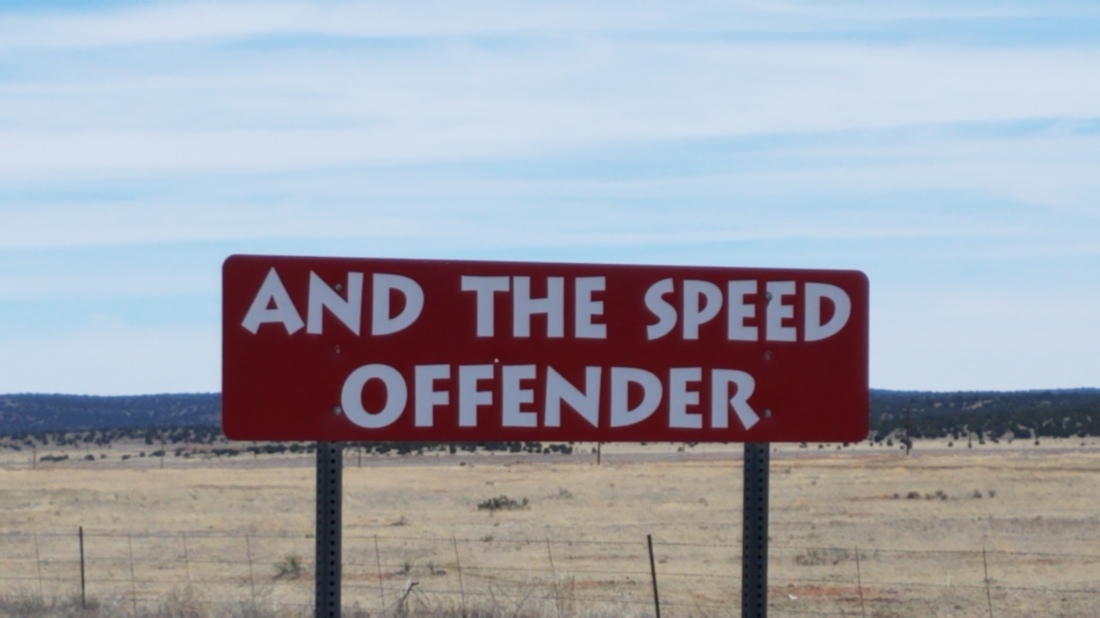 More gradual climbing finally lead to a nice 5-mile easy downhill into Seligman. Their supposed claim to fame is that Seligman is the origin of Route 66, or so their sign says! Anyway, we managed to find a nicely stocked Family Dollar store right on route! Prices were very good there, so we thought about getting a few dinner items for at the Seligman KOA (our intended evening’s lodging). As we were ahead of P&J, we picked up something to drink, relaxed and waited not very long for their arrival.

Sitting out in the parking lot having some lunch, the four of us then got together to decide where we were going to stay as after checking the weather for tonight, the winds were not necessarily going to be in our favor! Yuck! Decision? Motel it again! Fay got a recommendation from one of the cashiers there in the store for the Stagecoach 66 Motel.

We looked online and they had a double queen bed room available at a very reasonable rate! Done! It was only 1.5 miles away and practically next to the KOA! The cashier also recommended the café there at the motel! Fay is very good at getting recommendations from the locals for places to eat, etc.

An easy ride through the remainder of town past several touristy shops to the eastern outskirts of town to the motel to check in. They even have complementary coffee, tea and pastries in the office! The young woman at the “desk” was super nice, even willing to open the office up at 6:30 for us as we’re looking to get an early start because of tomorrow’s unfavorable winds. The café opened up at 4, but, there Happy Hour is from 6-9! That’ll work for us!! Our room is good sized with plenty of space for our unloaded bikes and panniers. It’s nothing fancy, but, has the basic necessities.

Went for dinner a little after 6 at the Pizza Joint adjacent to the motel. P&J split a chicken parmesan dish, we split a Caesar salad and Fay had some of Rob’s huge calzone! And it was huge and good! Back at the room, we set our alarms for an early rising to hopefully get ahead of the headwinds which were forecasted on most of tomorrow’s route to Williams.

Back at the room, we set our alarms for an early rising to hopefully get ahead of the headwinds which were forecasted on most of tomorrow’s route to Williams.

(Our quarters for the evening. We managed to fit all of the bikes into the room!)