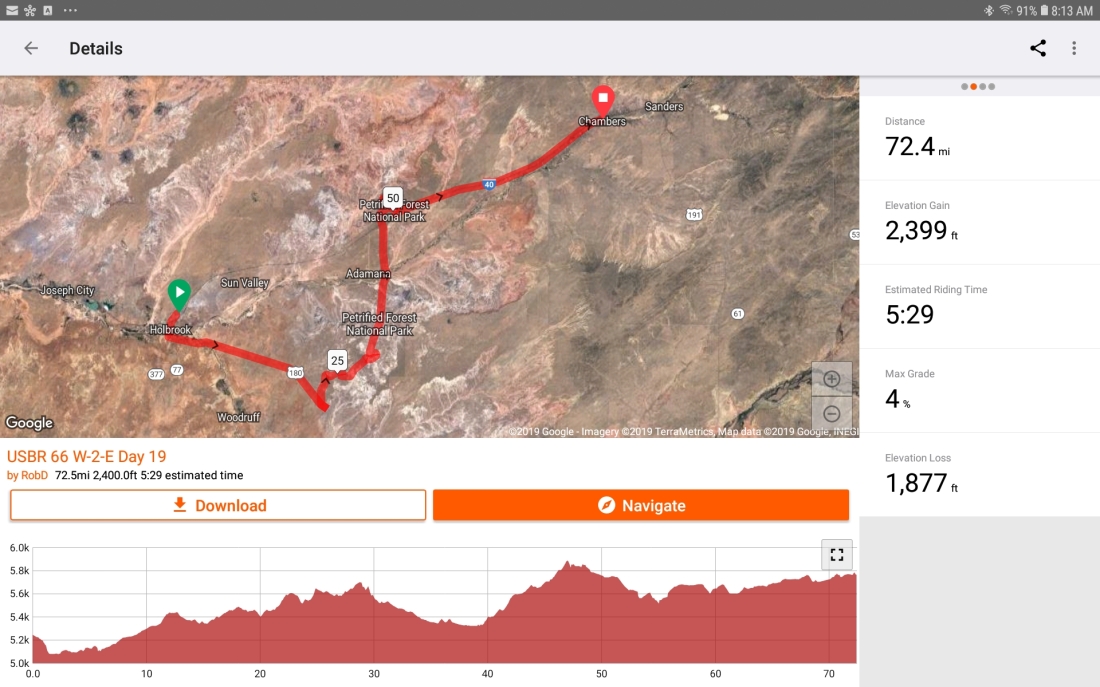 Worst part of the day: Can’t think of any!!

Fay’s eye felt better this morning. Wanted to get a fairly early start in advance of headwinds for the first mile or so out of town to get back on route. A quick, motel-provided breakfast at the Mexican restaurant next door of a large pancake and a side (egg for Fay and bacon for Rob) along with cereal, OJ and coffee.

A bit of a struggle into the wind going over the Little Colorado River (“little” is a pretty accurate description) took us out of town. A turn on US 180 towards the Petrified Forest National Park brought a nice relief of partial tailwinds for the roughly 18 miles to the PFNP. It was thousands upon thousands of acres of fairly barren, scrub-brush-laden, cattle-grazing land on either side of the road with nary a building or structure to be seen. Hardly a cloud was also seen in the beautiful morning blue sky. Mountains in the far distance on our right (south) and mesas and plateaus to our left provided an outline on the horizon.

A long, gradual ascent with rolling hills finally brought us to the Petrified Forest Road. There were a couple of museums (privately owned) at the beginning where we stopped briefly at one. By now, the winds which were out of the south had definitely picked up. Fortunately for us, our direction through the park was north!! 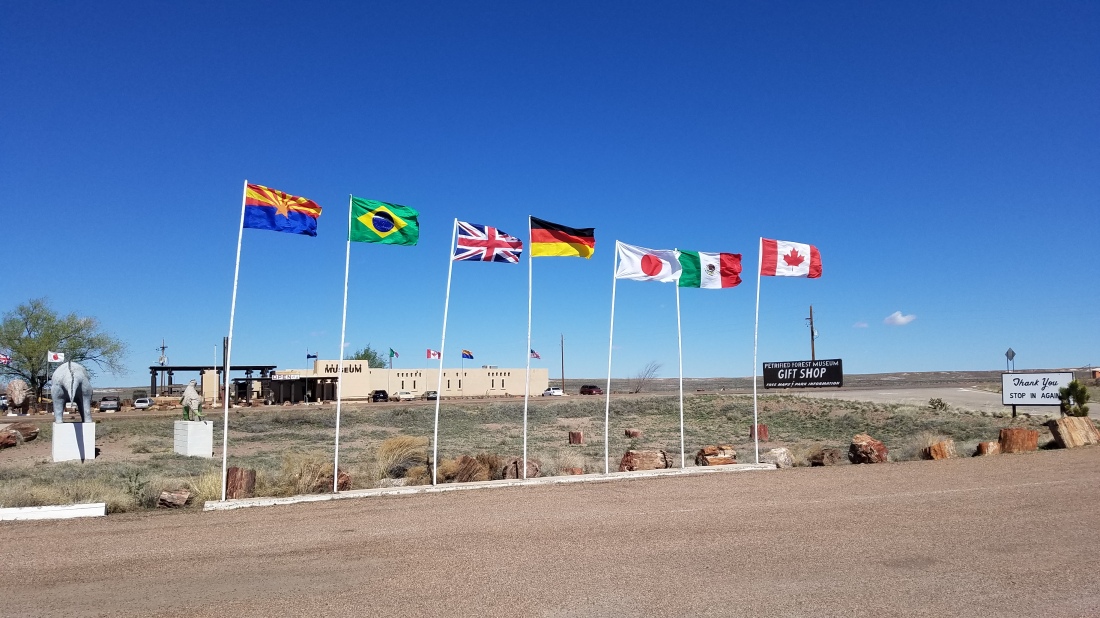 (These flags were a welcome sight for the amount of tailwinds we were going to have!!)

Rob had a National Park pass that got us into the Park for free (otherwise, it would’ve been $10/bike!!). 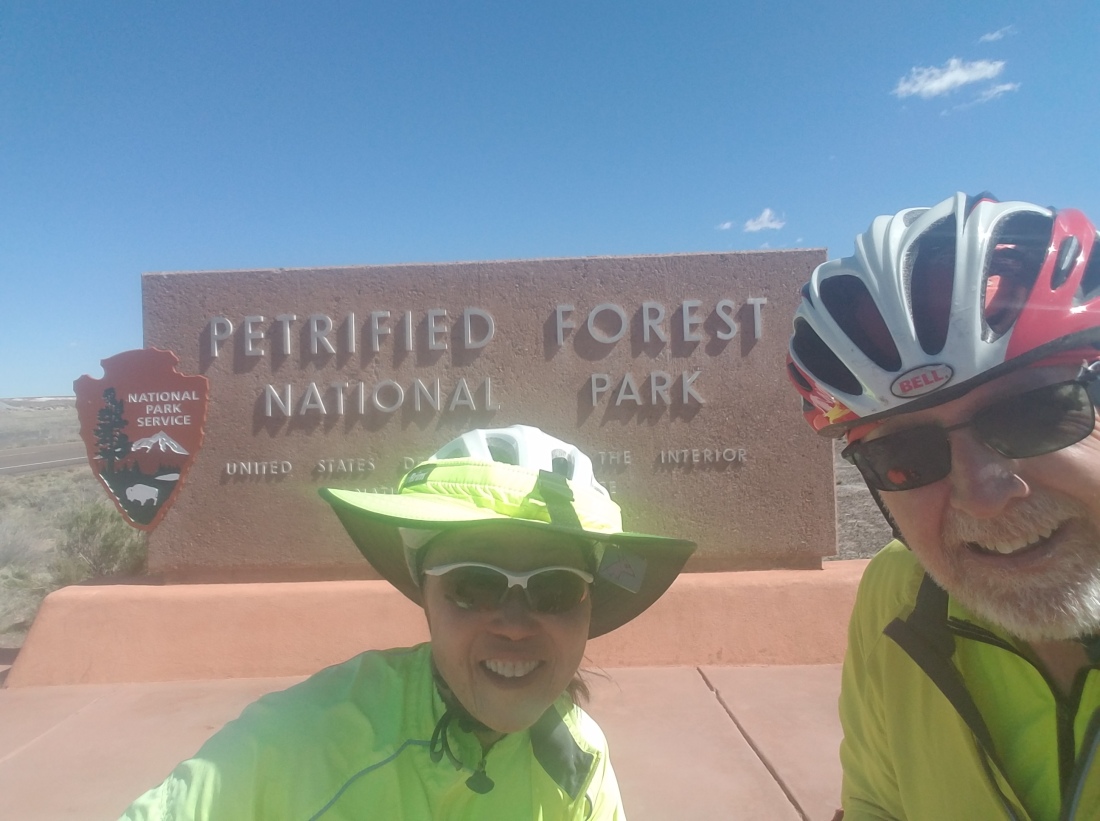 It was a treat getting started into the Park with this nice tailwinds! The Visitor Center was a little ways up the road where we stopped for a while to watch an interesting video about the Park, view the exhibits and refill our water bottles.
Returning to the road (almost 29 miles total miles before the end!), the colors of the Park’s landscape reminded us to the Painted Canyon at the Theodore Roosevelt NP in western North Dakota. Striking layers of different colored sediment were exposed from thousand of years of erosion into a variety of earthen shapes. 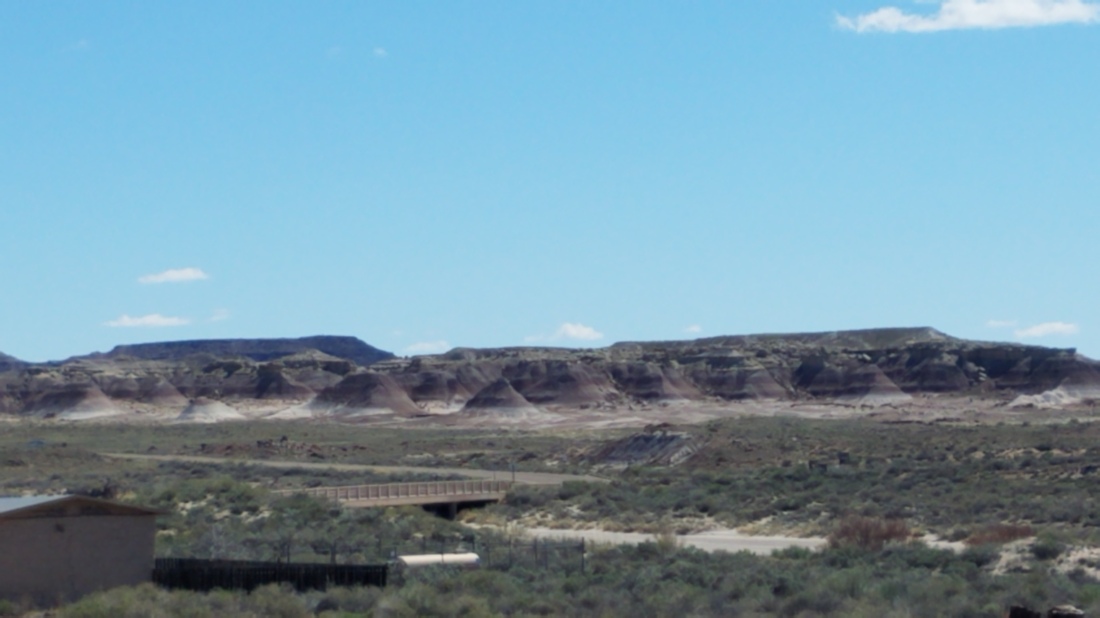 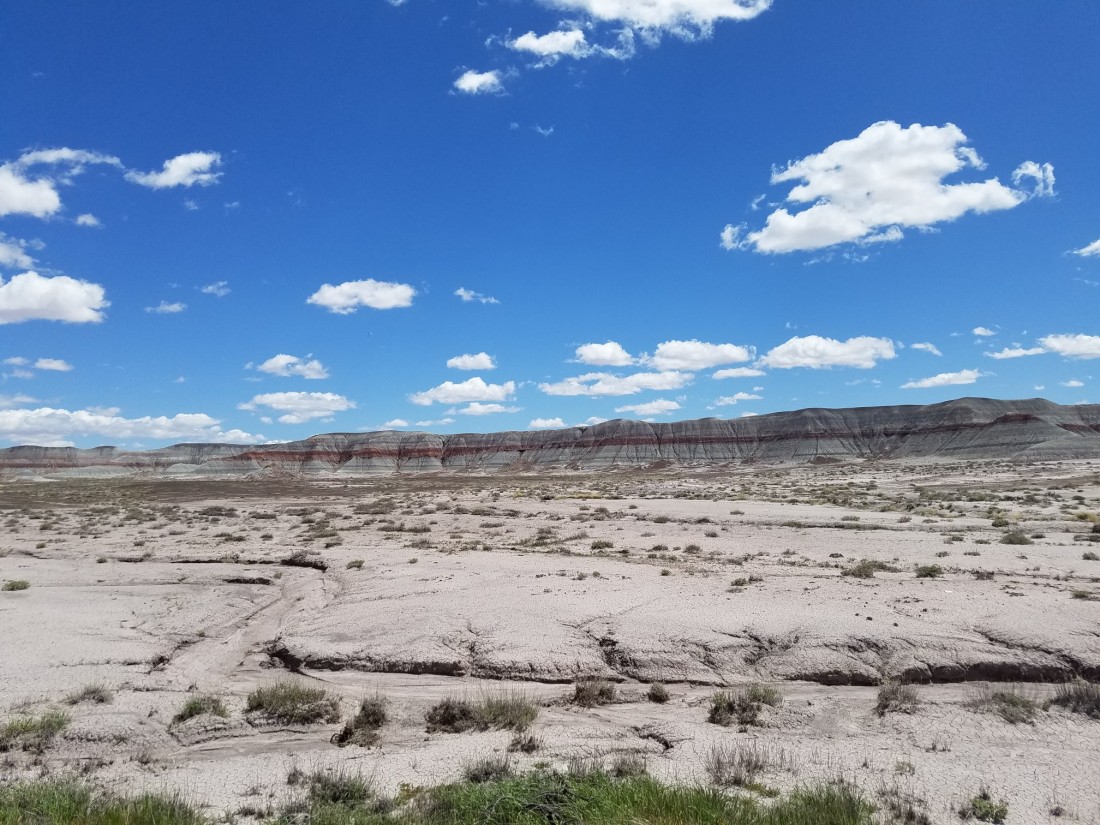 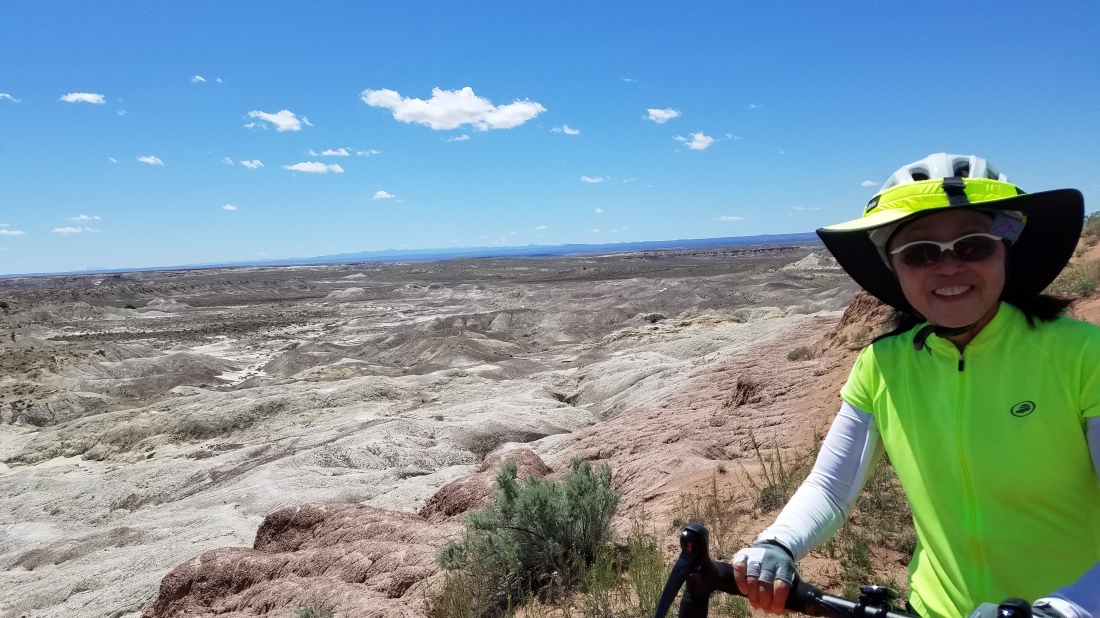 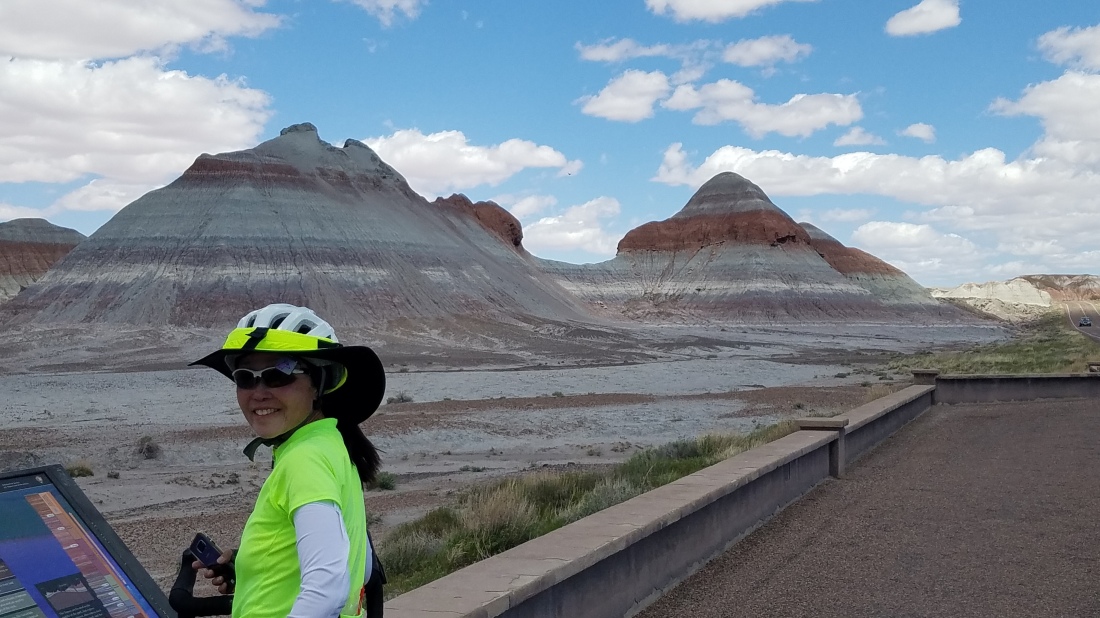 (Some of our sights inside the Park.)

Climbs and descents permeated our ride through the Park. There was one descent where both of us reached over 40mph!! The tailwinds helped! Sometimes we forget that we have an extra 35 to 40 pounds. 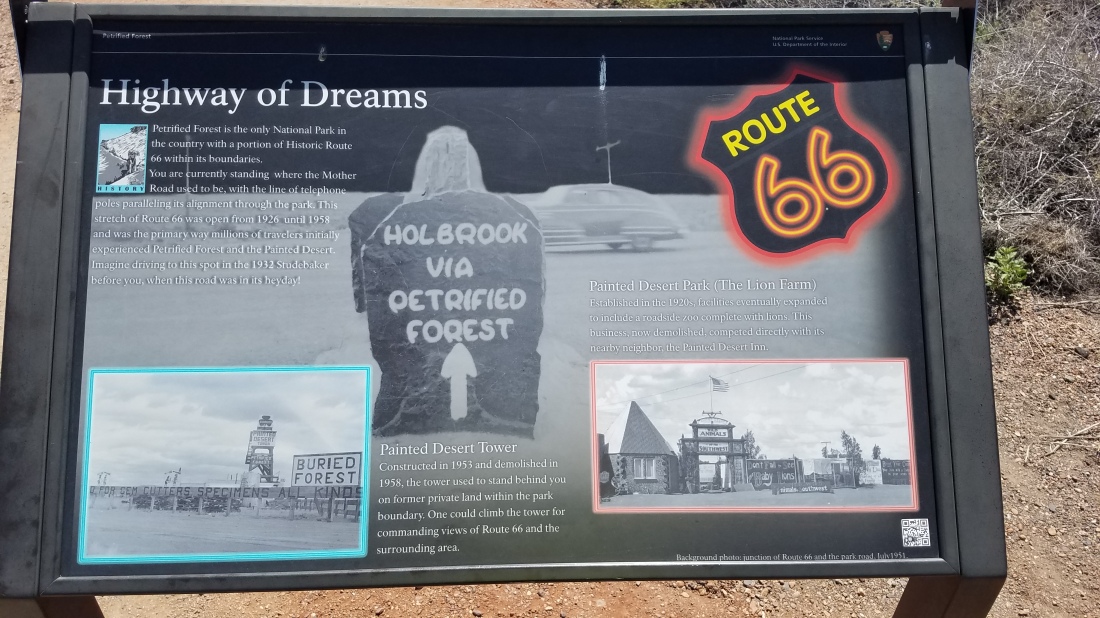 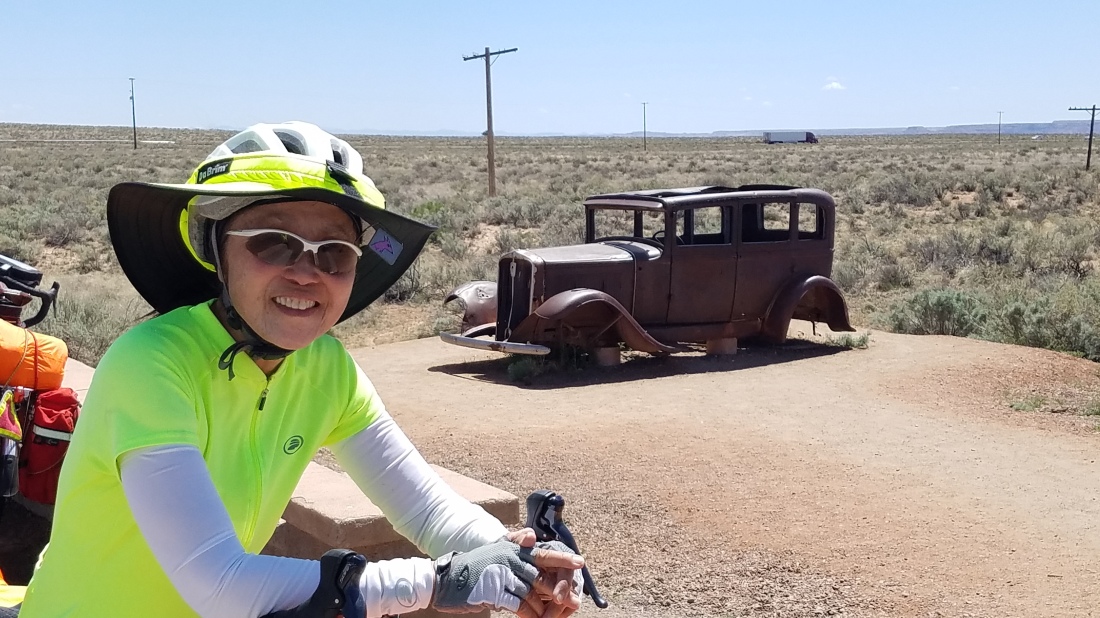 At roadside display, we met a couple who was also doing Route 66 from Chicago to Santa Monica. They started only a couple of days after we did and plan to finish around the same time as us, middle to end of May. The only difference between us is that they’re driving! The husband has this fantastic, cherry red body, immaculately conditioned 1964 Cadillac!! They’ve been patronizing a lot of old Route 66 places in the Midwest. Taking in all of the nostalgia. That’s what we’re hoping to do with trip. 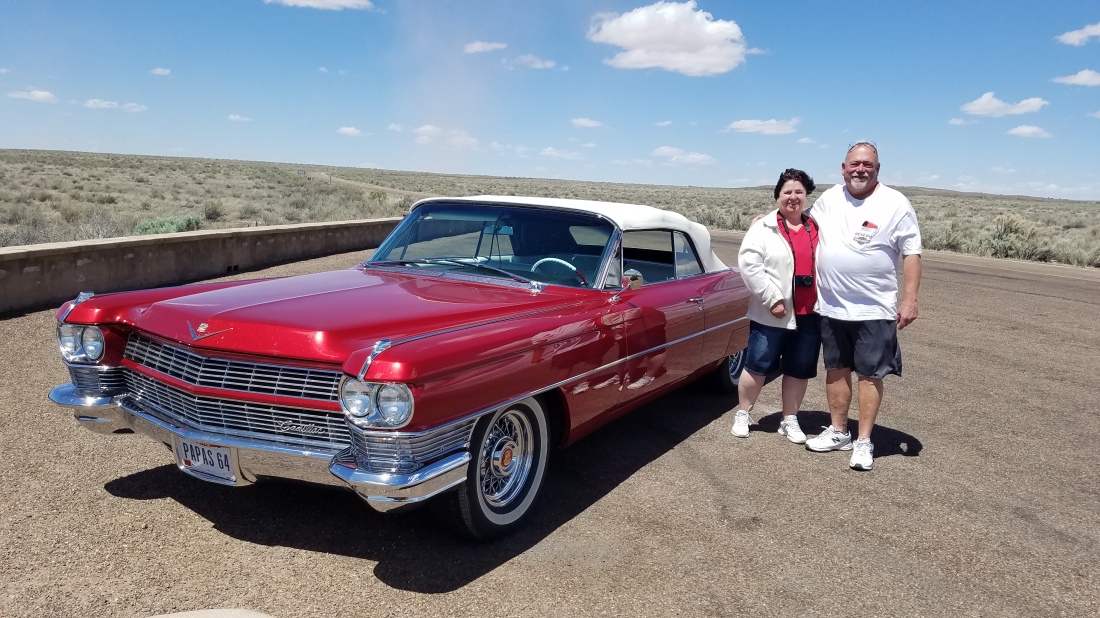 The north part of the Park is the Painted Dessert. The curvy, five miles of this portion of the road (some uphill into the wind! NOOOO!!) had a number of vista points with some gorgeous views.

Leaving the Park, it back onto I-40 heading to our evening’s lodging, the Days Inn in an area called Chambers. We have a very nice room with plenty of space for our bikes and bags. 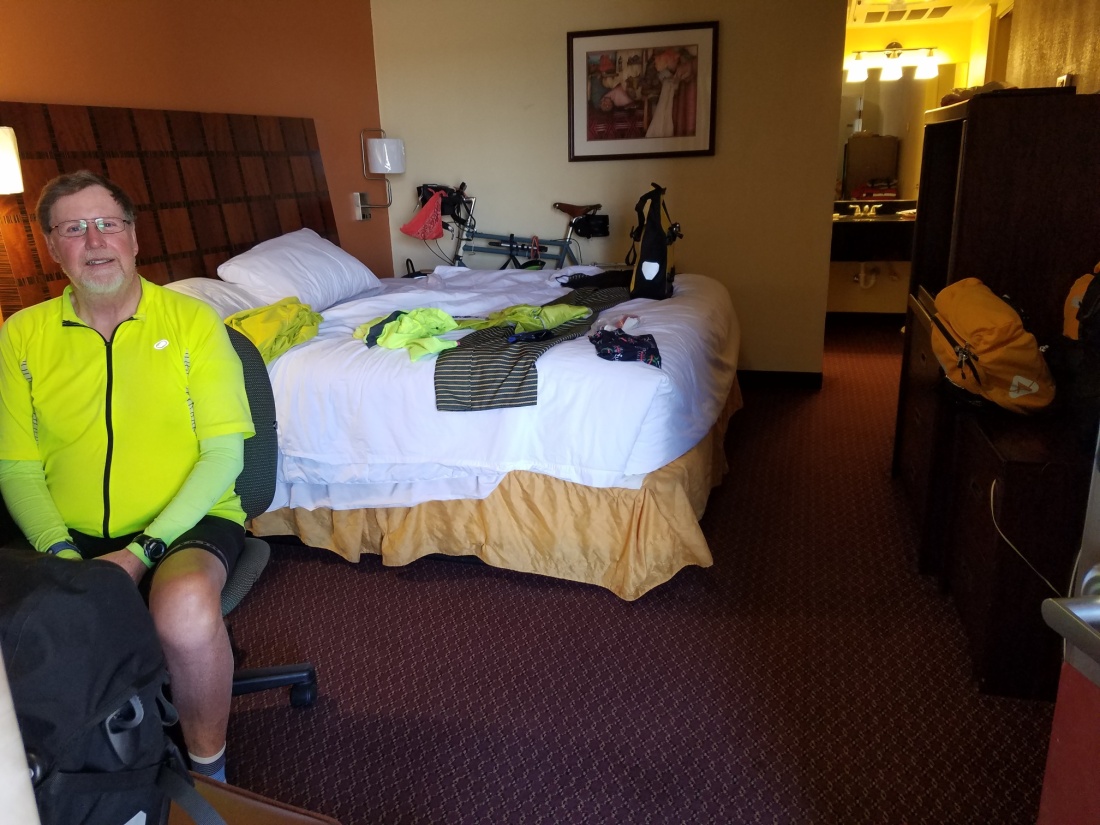 Like our Holbrook motel, the Days Inn has an adjacent restaurant where their motel-provided-breakfast is hosted. It was 5pm and we wanted to go to that restaurant for dinner (nothing else around, no grocery stores), but, it was closed!! We guessed it was because of today being Easter Sunday. The motel’s front desk clerk said it would open at 5! So, off we walked next door to the Mobil gas station/convenience store to pick up a few things for dinner. Walking back to our room, Fay noticed that the “Open” sign was lit for the restaurant! What!?!? We checked the front door and it opened! So, in we went. The workers had arrived only a few minutes earlier. Since we already had some stuff for dinner from the convenience store, we split a frybread burger. The Frybread is a very popular dish for the locals here. Fay had it back at the lodge with her stew.

Back at our room, we had a “second dinner”, some of our convenience store stuff! That satisfied us along with our Nutter Butter cookie dessert! Yum!!

Tomorrow, we leave Arizona and enter New Mexico. In Gallup is where we’re looking to camp again. Peggy and Jerry will be joining us at our destination via a rental car from Flagstaff. Looking forward to seeing them again and seeing how Peggy is progressing.