Design a site like this with WordPress.com
Get started
Skip to content
fayrobepicjourney Uncategorized April 27, 2019November 1, 2021 4 Minutes 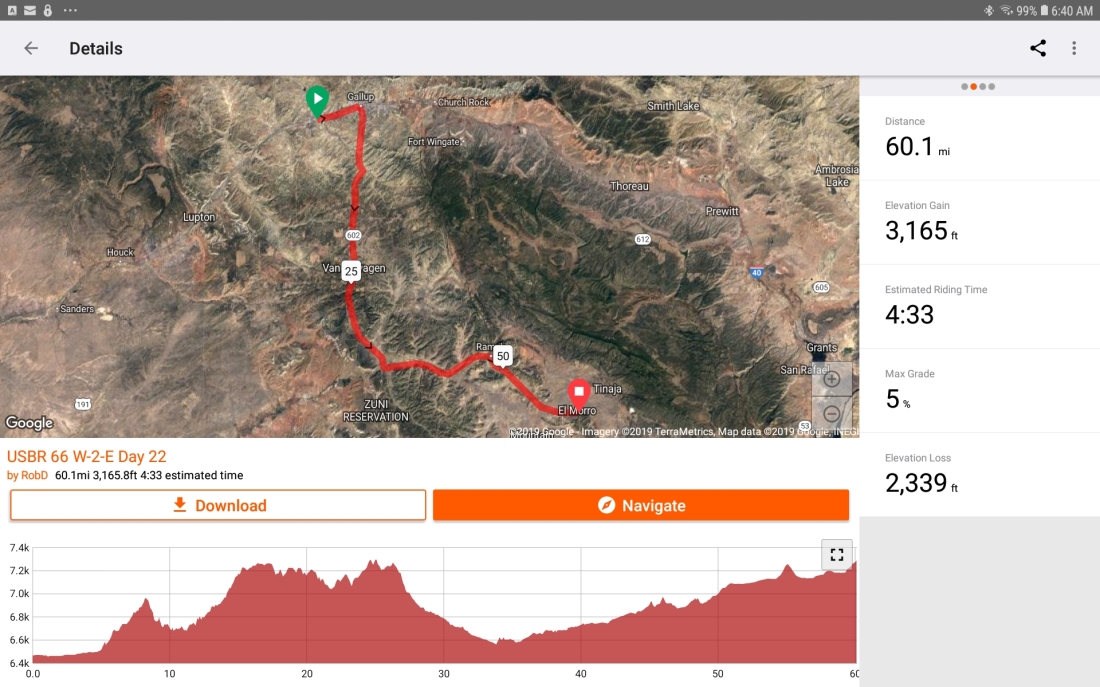 Best part of the day: The entire day!

Worst part of the day: None!

Last night, we had been contemplating whether our route today would end in Grants via I-40 or take the Adventure Cycling route towards El Morro. After checking the weather for today, we decided upon the El Morro route, and, very glad that we did!!
Got up around 6:30 to a very cool and crisp morning, but, with wonderful blue skies! After a fairly quick breakfast there at the motel, we were on our way by 7:40. Our route took us back into the heart of Gallup then heading south along State Route 602. Had some climbing leaving the town and a bit more hills and rolling hills for the first 23 or so miles. It was a decent road. The shoulder was somewhat broken up at the edges in place as well as fine gravel strewn throughout it. So, we had a little navigating to do along with dealing with the somewhat light traffic.

Eventually we reached an Indian convenience store/pawn shop in Vanderwagen. Took a short break for a snack as we had already ridden a couple of hours.
We were still in Navajo Nation territory before, in, and after Gallup eventually reaching the border with the Zuni Pueblo tribe a short distance after Vanderwagen. The road now turned to wonderful pavement, both traffic lanes and shoulder! With a nice tailwind to aid us, we almost didn’t have to pedal for the 6-mile descent that followed! Gorgeous scenery on both sides of the road capivated our eyes!

Alas, all good downhills have to come to an end. A turn eastward sent us towards the town of Ramah (the locals pronounce it Ray’-muh). The winds were still helping us somewhat which is what we had hoped based upon our weather checking last night. Found a Family Dollar store there in Ramah and made that our lunch stop. A Frito-Lay delivery man was there and we chatted with him about what we were doing. He kindly offered us 4 small bags of Doritos chips before disappearing into the store!! Again, another example of all the nice people we’ve encountered so far on this trip!

(Break time at the Family Dollar.)

Back on the road once more, we found another gas station/convenience store, a Conoco station. The Family Dollar’s restrooms were not available, so we tried this one with success! Bought a couple of sodas for tonight’s dinner and treated ourselves to Blue Bunny-brand ice cream sandwiches! Yummy!! 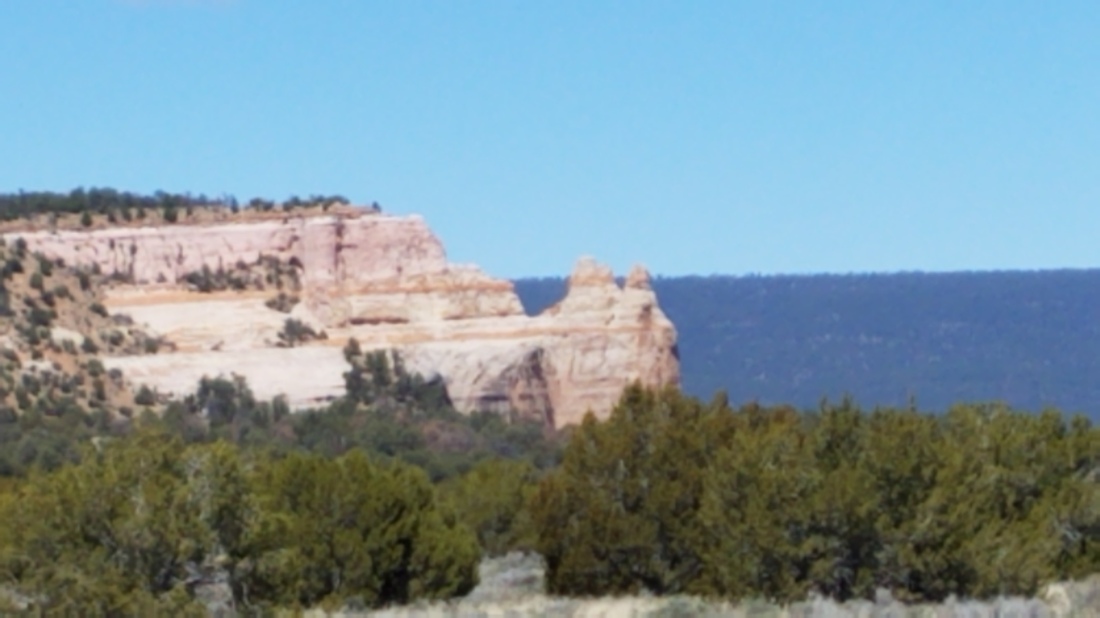 (A rock formation on our way to the El Morro National Monument. Can you make out the “face” on the rock (center) below the “V” in rock?)

Once again, we were off to our evening’s destination, the El Morro RV Park. But, before we reached there, we made a side trip to the El Morro National Monument’s Visitor Center. The ranger told us about a couple of trails, one a ½-mile long and the other 2 miles. We did the shorter which is the Inscription Trail. It’s a fascinating place! The location was once the stopover because of it “oasis” water pool! Yes, a water source in the middle of this arid land! The walls of this sandstone headlands (which is what “El Morro” means in Spanish) have hundreds of inscriptions and hieroglyphs imprinted along these walls. Some from the native people who inhabited the area all the way back to the 1200s, others from the Spanish explorers, and still others from Westward-traveling settlers, US soldiers and Union Pacific Railroad surveyors! 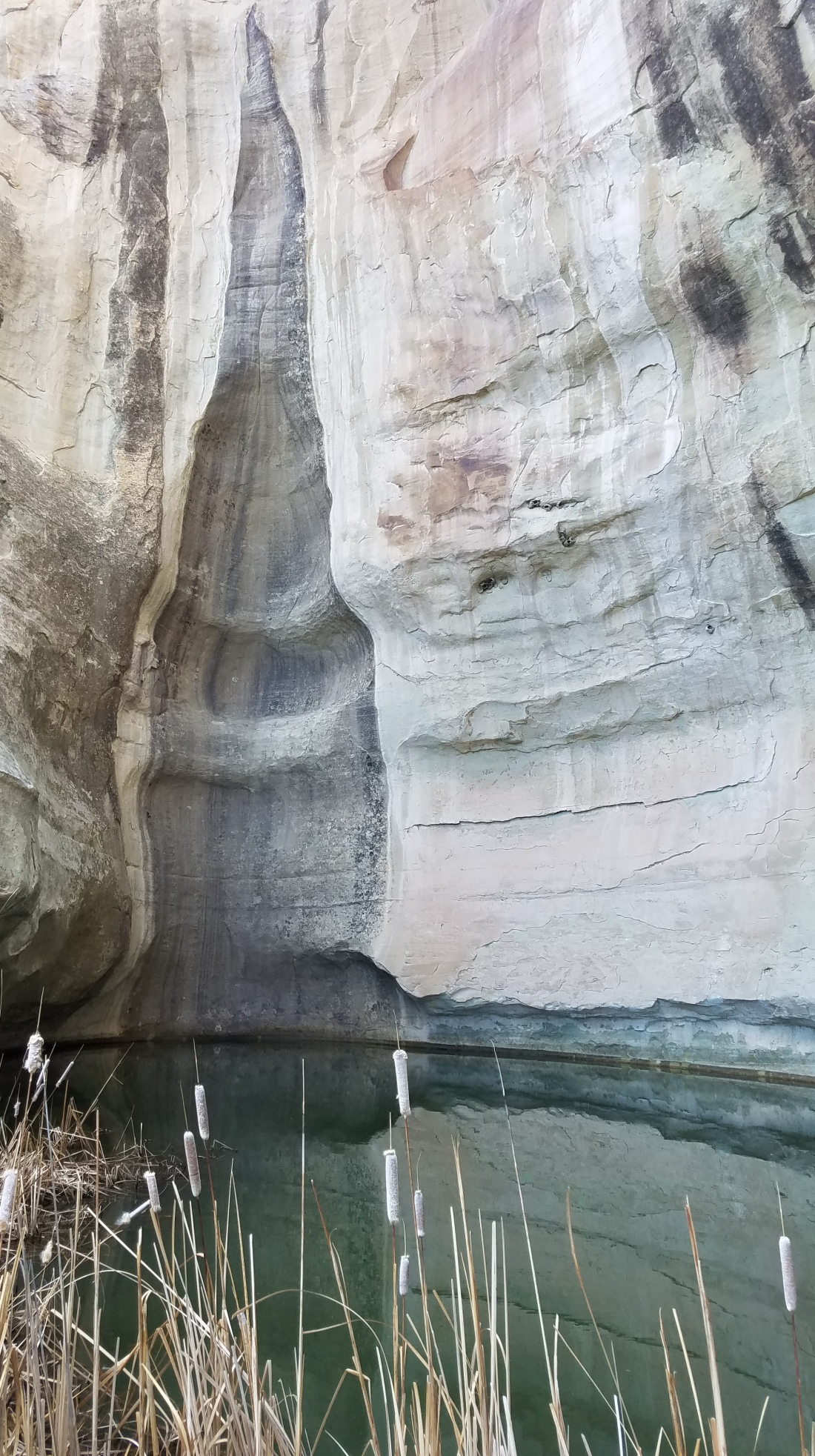 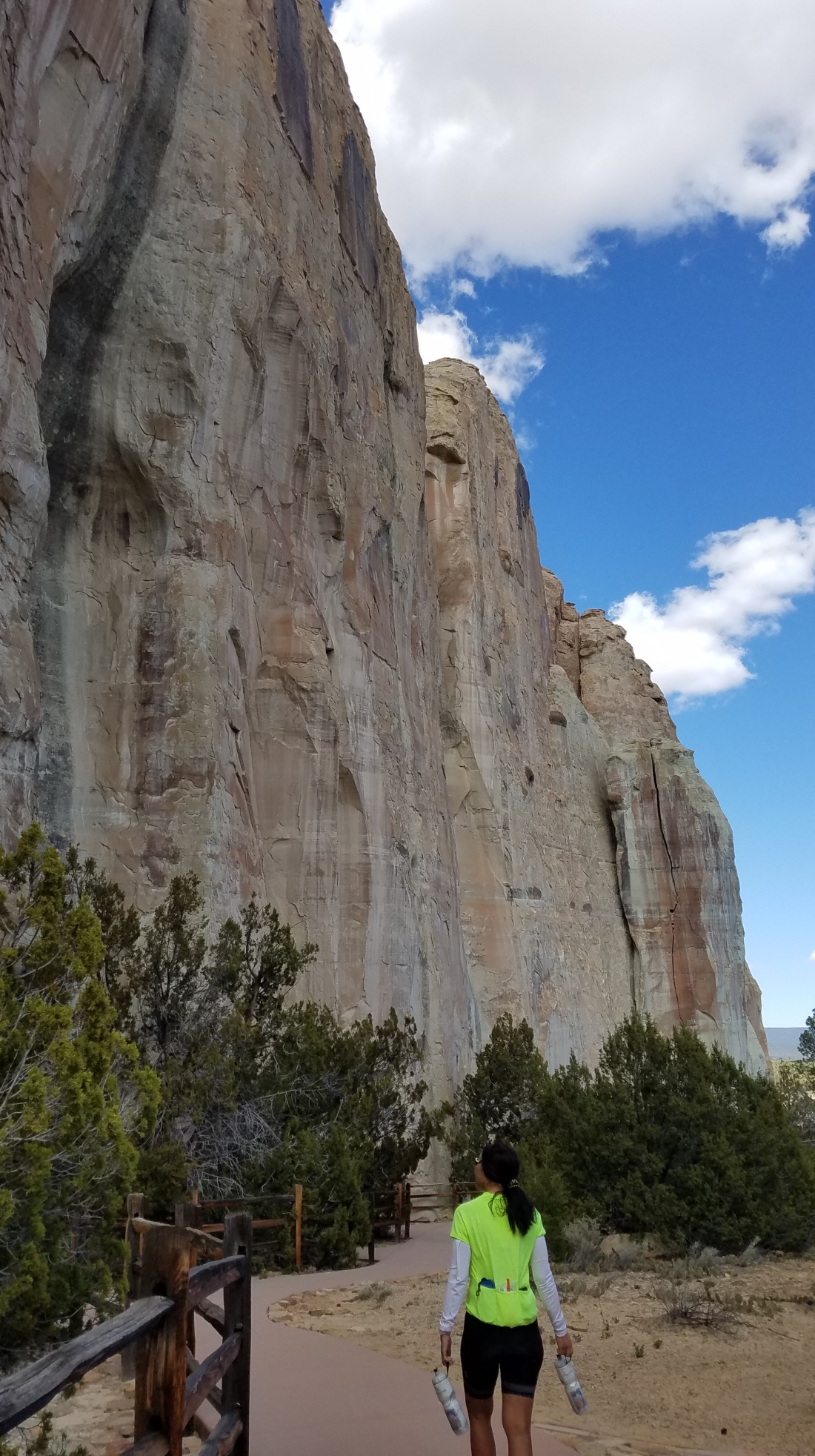 Returning to the Visitor Center, we watched a 15-minute video about this Monument. It was created by President Teddy Roosevelt as part of his Antiquities Act. After the video, we learned a lot more from one of the Rangers about the “oasis”. We also asked about their campground there, but, with no “amenities” (i.e. water, bathrooms), even though it was free we still opted for our original choice which was about a mile further down the road.

Pulling into the gravelly RV Park’s entrance, there was a sign that said “Camp Host cabin #5”. So, off we rolled to find it where we ran into a gentleman in a maintenance cart. We said that we were looking to get a tent site for the night. He obviously noticed we were bike touring and said that the regular $15-fee would be on them!! How generous of him!!
Picked one of the 3 tent sites and got ourselves set up and showered. Fay put together a wonderful dinner of the leftover turkey and stuffing from last night, freeze-dried sweet/sour pork (where we FINALLY used that small can of pineapple chunks which she’s been carrying in her panniers for more than two weeks!), the leftover bread also from last night and our sodas. Dessert, of course, are fudge mint cookies again from our Walmart shopping yesterday!

Rob had noticed in walking back from the showers that one of the other unused tent sites had some firewood! Being the pyromaniac that he is, he wanted to have a campfire at our site. So, snagged four pieces from the small stack at that other site, assembled some dry kindling, and, got it going!! 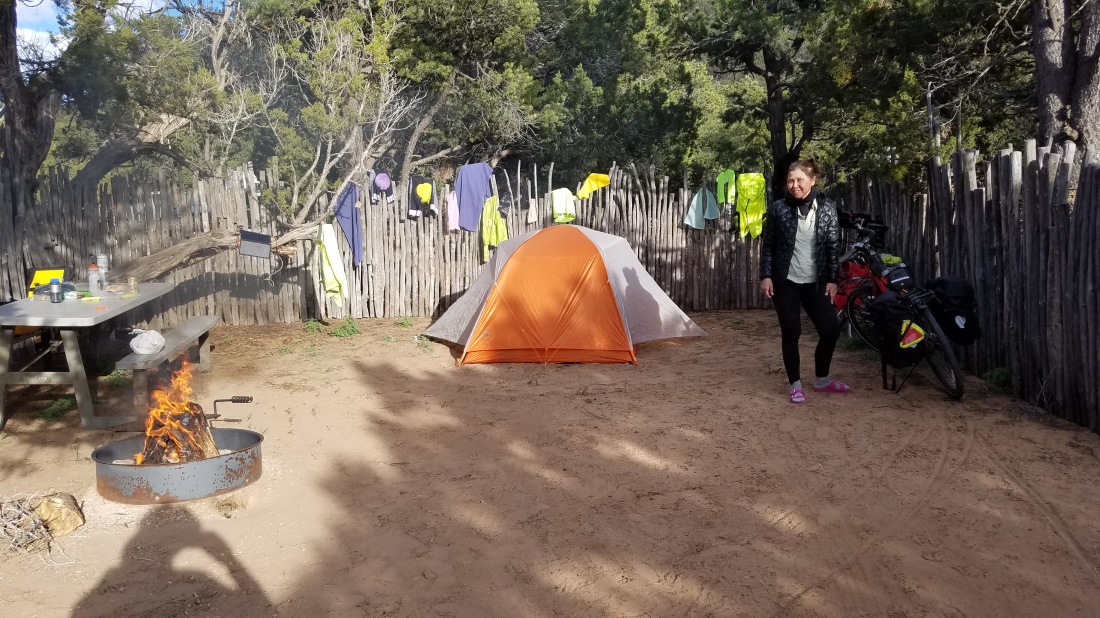 With no power at our tent site, Rob also brought out the solar panel charger for the first time to attempt to charge our phones. As it was fairly late in the afternoon, we only had about an hour plus of good light before the sun dropped below the top of the trees making the charger less effective. (The solar panel charger is hanging from the tree limb in the picture above.)

All in all, we think this was the best riding we have had so far on this trip!
Tomorrow, we conquer the Continental Divide!! Then it’s all downhill to Chicago from there!! (Yeah, right!)