Design a site like this with WordPress.com
Get started
Skip to content
fayrobepicjourney Uncategorized April 29, 2019May 1, 2019 4 Minutes

Worst part of the day: Rob’s bike still acting up a bit

Our campsite was nice and the owner who checked us in yesterday said she was so busy because of the “Gathering of Nations” pow wow that was in Albuquerque this weekend.

It ended being a very cold morning. As usual, Fay was dressed up in her warm clothing for bed. She wasn’t going to take any chances and wanted to be prepared for the cold night. Rob was in his usual T-shirt and shorts which was fine for him!! She was comfortable but had a hard time sleeping.

The alarm went off at 6, but, Fay wasn’t ready to get up. We finally roll out of our sleeping bags around 6:45ish. Fay had her usual her oatmeal and Rob his Pop Tarts with a banana. Got our tent and stuff all packed up and rolled out around 8:30. From the hard-packed, dirt road out of the campground onto the main highway, the Turquoise Trail (State Route 14), we continued the rest of the climb we had started yesterday leading to the campground.

(A couple of the views on the Turquoise Trail/State Route 14 we had on our way towards Madrid.)

A little ways before reaching Madrid, came upon this place where all of the sculptures are metallic! 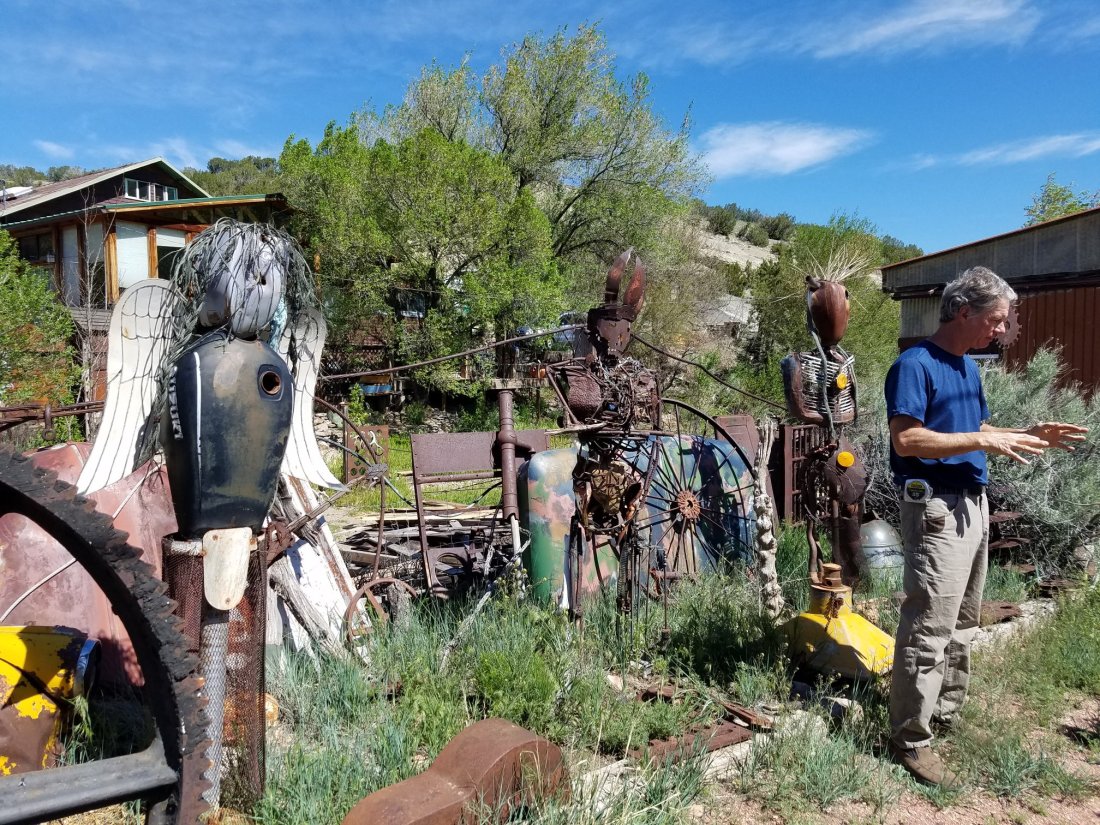 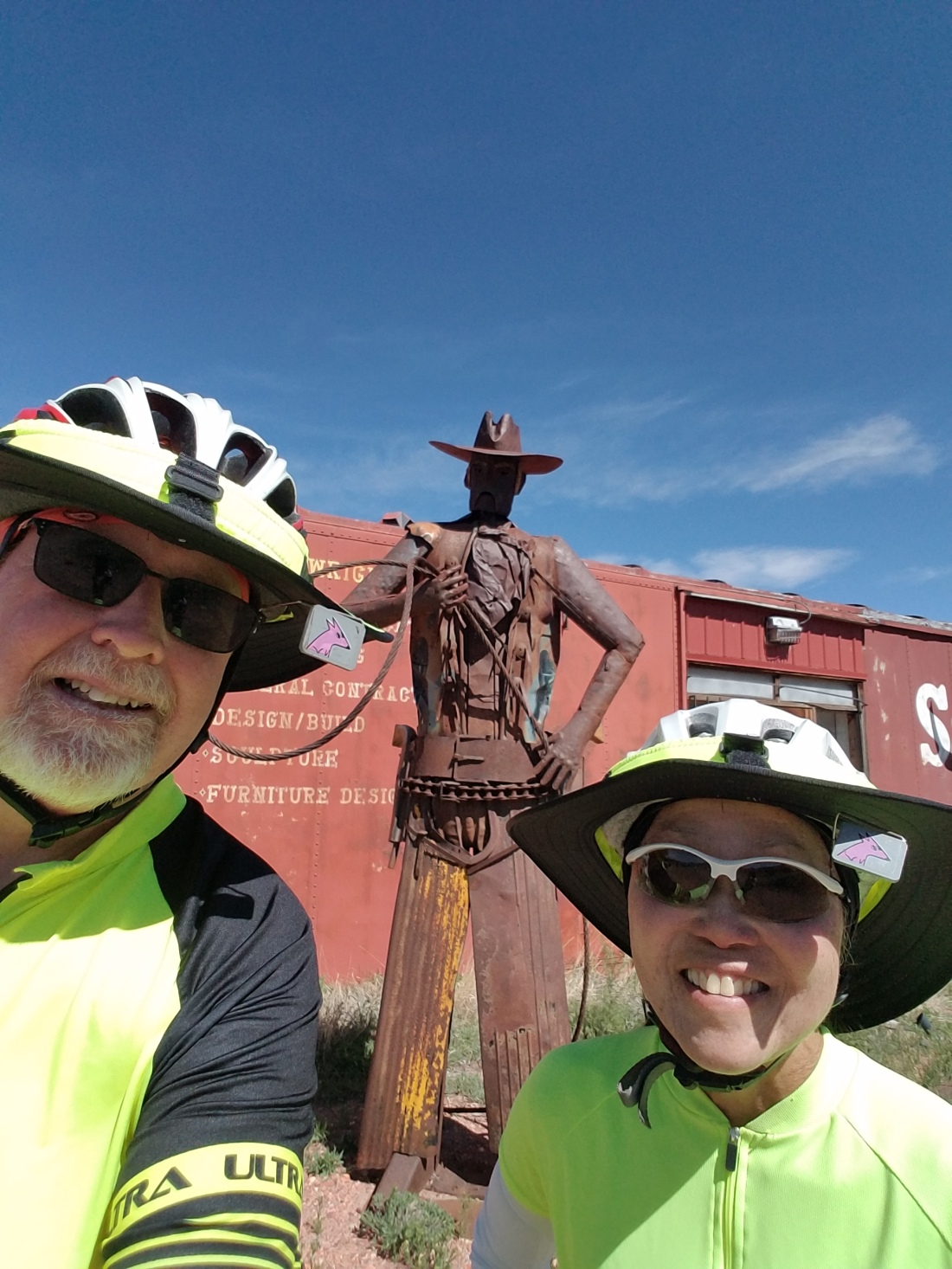 (The top photo shows what we believe is the creator of all these are pieces.)

Twenty miles of rolling hills eventually brought us to a long, 4-mile decent down to the town Madrid (they pronounce it Ma’(like in “cat”)-drid). It had several artsy, high-end, crafty shops. The town was only about a ½-mile long. They had pretty much a wide assortment of everything that you can think of. We were quite surprised at how you can drive for miles with nothing all around and then all of sudden, a whole row of quaint little stores and restaurants. Found a spot to take a break where we had our flour tortillas with peanut butter and Rob also had the Doritos chips from the driver way back in Ramah Family Dollar. 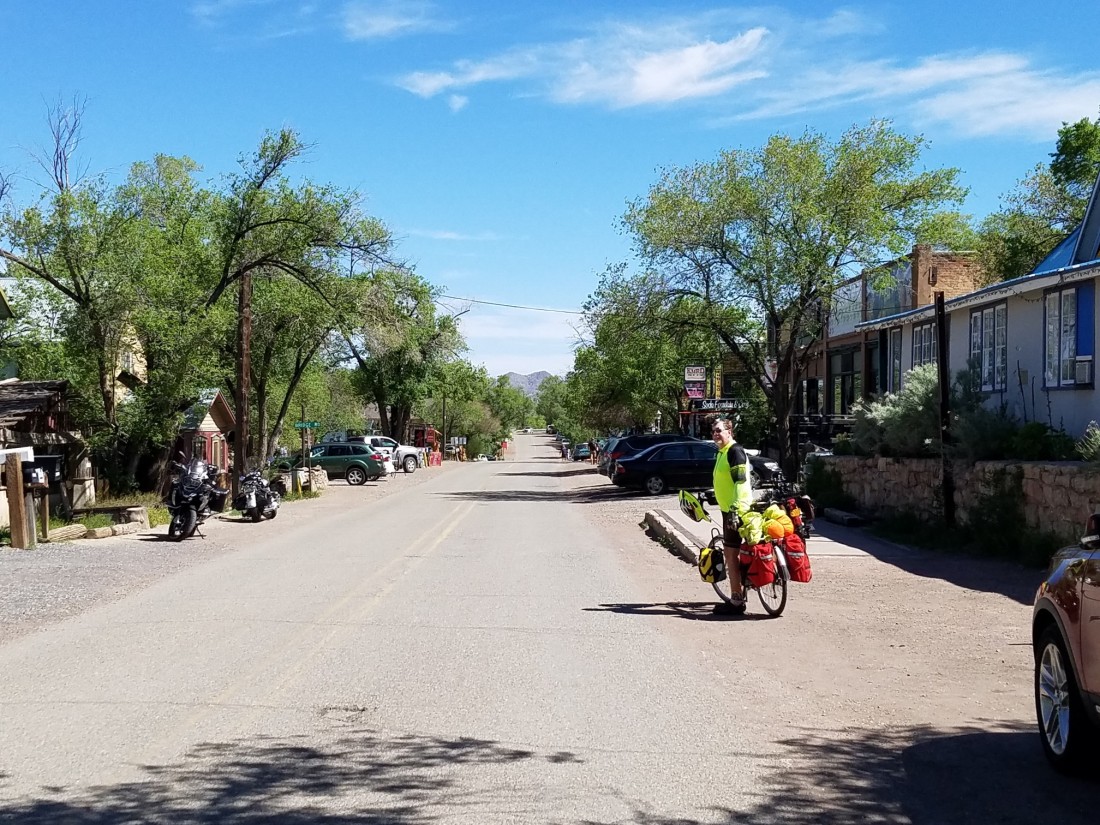 (Looking down the the main drag in Madrid.)

(Some amazing  wood sculptures at this place called, Moonbow.)

Saying so long to Madrid, we encountered a lot of rollers, but, luckily we had crosswinds or tailwinds which made it nice. But, always it was a gradual climb from 6,000’ to 6,700’ towards Santa Fe. About 9 miles along, we pulled into a convenience store and picked up a big container of orange juice. We drank as much as we could and poured the rest into Fay’s water bottle for later.

Not having time yesterday to plot out today’s route on Ride with GPS, it caused a small problem today. We missed a turn after leaving SR14 and the road took us into a fairly new residential neighborhood. The homes here were in the Adobe-style in color and shape. Coming to a crossroad, we saw a lady on a bike making a left turn towards us and we asked her for directions. She said for us to follow her as she knew pretty much where we wanted to go. She got us to the one road for which we were searching and eventually intersecting the road onto which we had originally intended to ride. At that point, we knew we were back on route. The woman was pretty fast and had gotten a bit ahead of us, but, she stopped to take a drink and wait for us. We rode passed her thinking she would continue with us, but, no! Didn’t see her again! She must have seen that we knew where we were going and decided to make her way back home. That was too bad as we didn’t even have a chance to say “Thank you” to her.

Rob got a phone call from Joseph, our evening’s Warm Showers host, and asked us about what time we should be at his house. He had a couple different photo shoots going on today and wanted to make sure that he was home when we got there. On the phone, we found out from him that he had done a Bike The US For MS ride back in 2010! He had checked our Warm Showers profile which had a picture of us in our BTUSFMS jerseys where he read that we had also done several of them. So, there was an instant connection.

We rode up to his place, but, he wasn’t home! Gave him a call and he arrived shortly after along with his girlfriend and his girlfriend’s brother who also lives at the house. Come to find out that Joseph had lived in Folsom and worked at the Folsom Bike shop a couple of years back! On top of that, when we brought the BTUSFMS Trans Am group a meal when they came through Folsom (Beal’s Point) back in 2016, Joseph had stopped by to just say “hi” to the group. Fay remembered him and he also remembered us bringing the group a meal. Just couldn’t believe that he now lives here in Santa Fe and our paths had crossed! We had no idea that he was going to be our host. What a surprise! He works for a bike store about ½-mile away and also does AirBNB bike touring. Come to find out that he did the Trans Am in 2009 with a friend fully self-supported which was where he happened to have met the MS group in Virginia. The following year, he was a route leader for the BTUSFMS Trans Am group.

(l-r, their friend, Julia, our host Joseph, his girlfriend Mari, and Fay in the kitchen.)

Quite unexpectedly, Joseph invited us to join in with the BBQ that he was doing tonight! He whipped up BBQ chicken, Tri-tip, sauteed zucchini and bacon-wrapped jalapenos stuffed with cream cheese!! The four of us along with one of their friends who came over enjoyed this excellent meal! We all sat around the dinner table a talked for hours! A wonderful evening!!

Tonight we’re sleeping indoors in the living room floor. We could’ve tent it outside in the backyard, but nah, it’s supposed to rain later on tonight.