Best part of the day: Crossing the Chain Of Rocks Bridge/Seeing the “elusive” Buddhist monk

Worst part of the day: A hot and muggy day

Fay had a hard time sleeping last night even though the bed was comfy. Crawled out of bed around 6:20. Roger was already getting breakfast going: scrambles eggs with onions, bell peppers, mushroom and cheese; along with coffee and a fruit mix (blueberries, raspberries and sliced banana).

(The living space of Roger’s loft. A nice, open concept.)

He had an appointment with a friend in the late morning, but, would join us on our ride out of St. Louis for a while before heading back home.

A couple of days ago, we had gotten wind about the Riverfront Trail in St. Louis being closed due to the high level of the Mississippi River. So, we tried to get more information about it and wound up talking with a gentleman, Steve Schmidt, from an organization called TrailNet. I had asked Steve if he could come up with an alternate route to get us to the Chain Of Rocks Bridge from Roger’s address.

He came through with that route in an email. Surprisingly, TrailNet’s office was in the same building as Roger’s place!! Yesterday before going to dinner, we stopped by their office to hopefully meet Steve to thank him, but, he’d already left for the day. Bummer. And last night, Rob used that route with a modification suggested by Roger to plot out today’s route on Ride with GPS.

The three of us headed out a little after 8. Working our way northwards, we rode through some of the older residential parts of St. Louis and then through the some of the rougher parts of north St. Louis. As it was during the morning daylight hours, the riding was okay, even saying “good morning” to some of the residents and getting nice replies!
On our route, we passed one of the largest cemeteries in St. Louis, Bellefontaine Cemetery. Roger told us that there are even tours that are conducted at this place!

Eventually, it was time for Roger to return home. Stopping at a safe spot, we said our goodbyes, expressed our extreme gratitude to our host and wished him a safe ride back. Then, on the two of us went.

Our TrailNet-aided route brought us down to ride a part of the northern section of the Riverfront Trail at the North Riverfront Park before going over the Chain Of Rocks Bridge and into Illinois. But, when we got there, we found that we’d need a boat!! The trail was at least 3’ underwater! 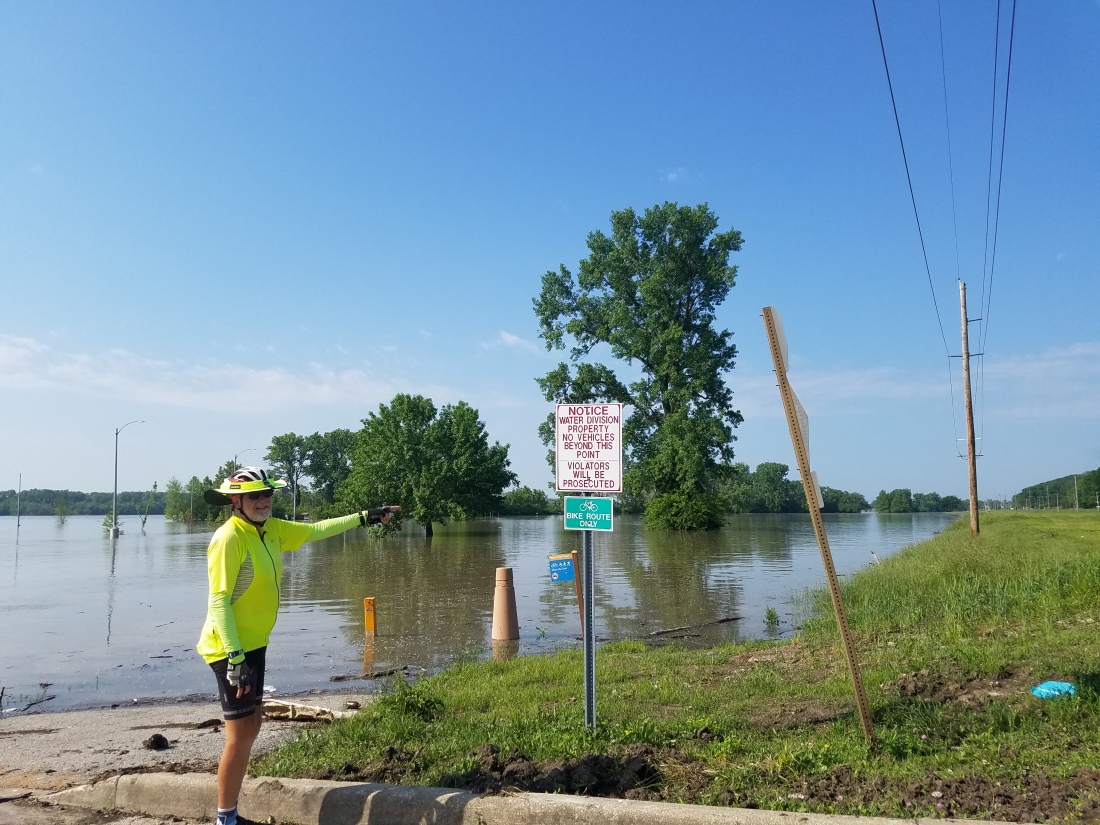 Back onto the surface street, we found dry land on a pathway at the entry point to the bridge! This bridge was once used for vehicular traffic, but, now it’s only for pedestrians and bikes. 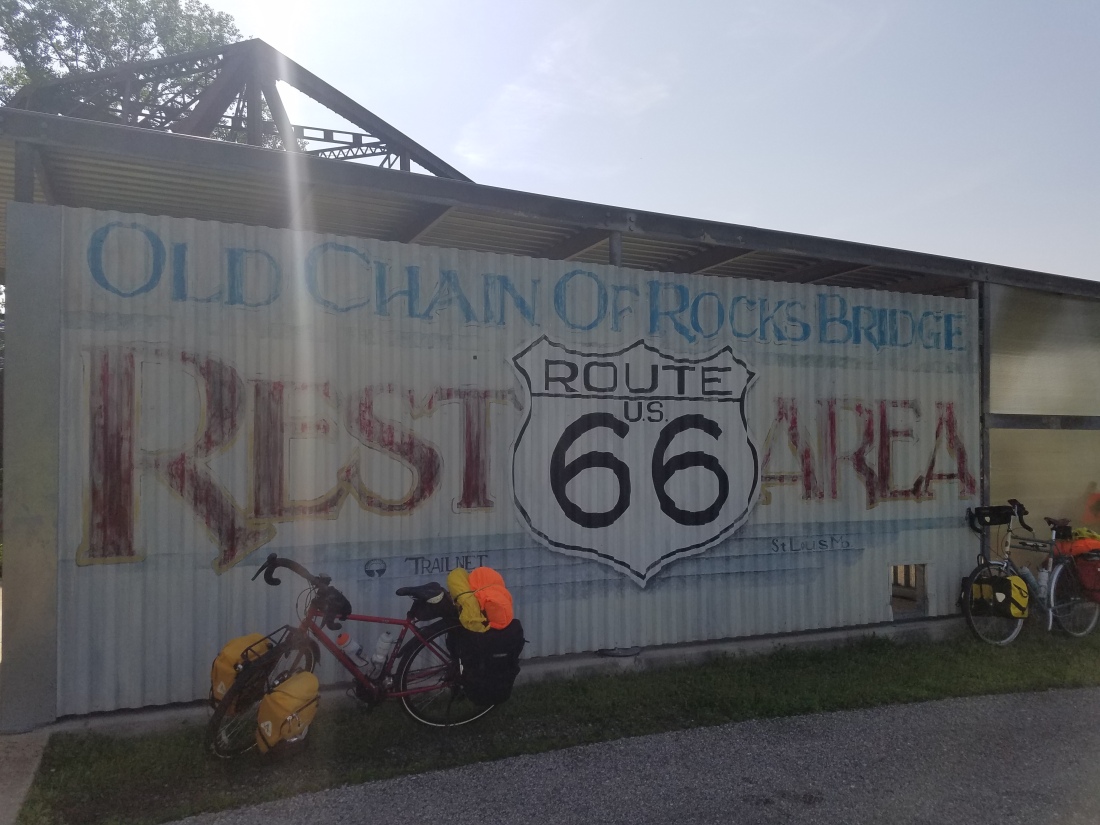 We stopped a couple of times on the bridge for pictures and to marvel at the breadth and speed of the flooded Mississippi River! 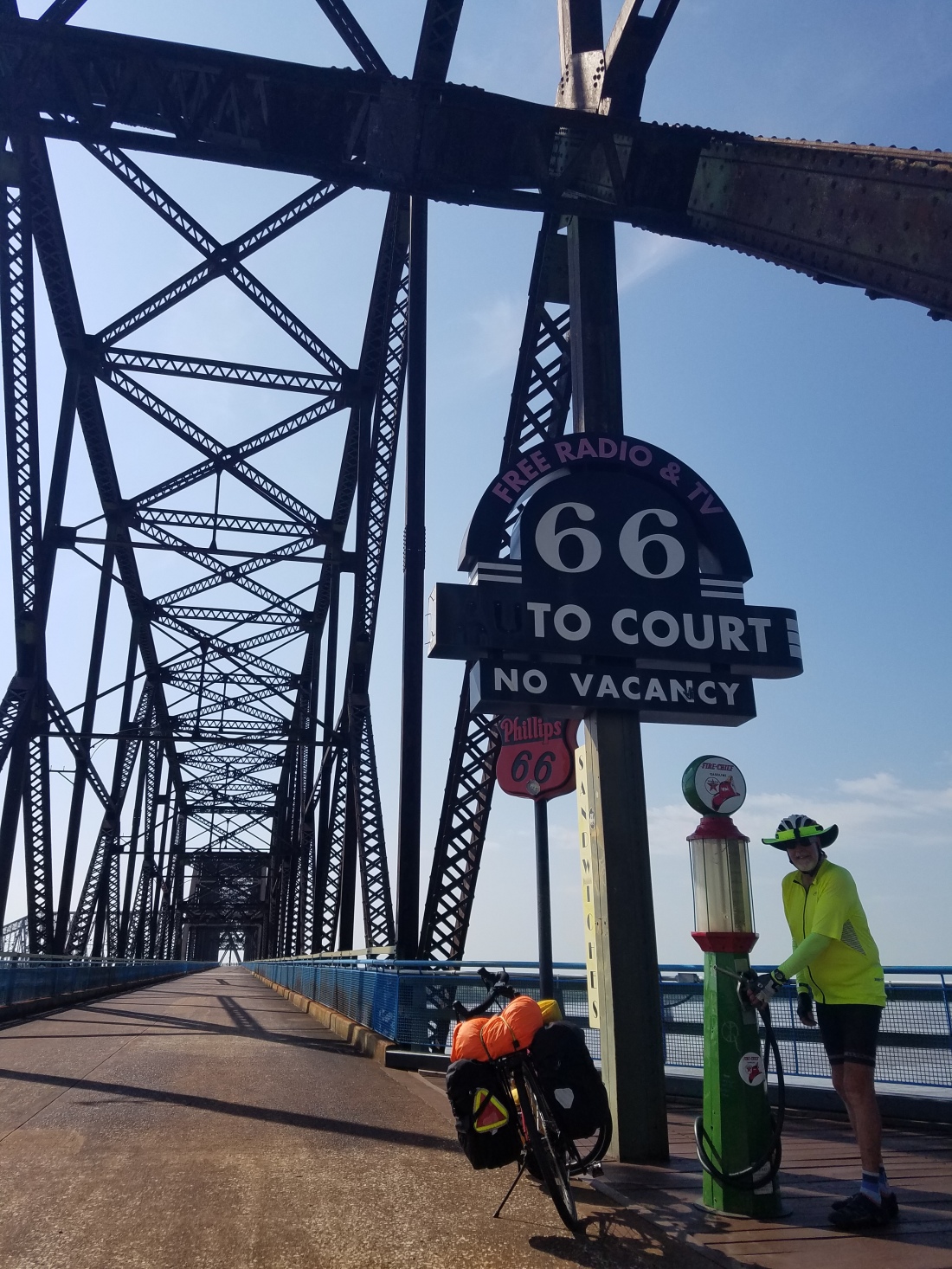 (The missing “Au” in the “Auto Court” sign part way across the bridge.)

(Don’t think the water should be that high for these old, castle-like water intakes! The one in the foreground was built between 1913-1915, the one in the backgroud in 1891!)

There was no “Welcome to Illinois” sign on the bridge, but, there was something like that on the other side where we took a couple more pics.

Met another couple there from the Canary Islands driving Route 66 where they hoped to finish in 3 weeks before driving up to SF. Gnats (or ‘squitos, not sure which) were buzzing around, so we didn’t stay long. The sun was shining and the temps were rising.

Back on the road, Rob saw the “elusive” Buddhist monk walking in our direction on the opposite side of the road!! Other people throughout our trip had spoken about him, but, we had not yet encountered him. He is walking for peace and started back March 1st in Santa Monica doing Route 66 and then on to New York City where he’s hoping to reach there by the end of June!! We stopped and he came over to us. Fay asked him how many miles was he going to walk today. His response, “32 miles!” Wow!! We took pictures with him and wished him a safe journey.

Rolling on, we rode a little more before we took a break at a Flying J truck stop, getting some OJ and having a PB&J on flour tortilla shell snack. While we were eating, the monk walked right on by at his same, steady pace!! After our break, we passed him one more time giving him a big wave as we biked on!

For most of the rest of today’s route, we rode on a couple of the Madison County Trail (MCT) bike paths. Very nice, paved trails, some taking us in some much needed shade! Through Edwardsville, the open field towns of Hamel and Worde,

(On the last of the three MCT bike paths we were on today.)

and, eventually into Staunton, our evening’s stop. Fay ran into the town’s IGA store for dinner items before we headed to our motel.

Tonight, we’re figuring out which town we want to have as our stop as rain and possible thunderstorms are in our upcoming days’ forecasts.