Design a site like this with WordPress.com
Get started
Skip to content
fayrobepicjourney Uncategorized May 25, 2019May 25, 2019 5 Minutes

Best part of the day:     Our Warm Showers host, Roger

Worst part of the day:  A muggy, overcast morning

Loud thunder and bright lightning woke us up in the early in the morning! A quick look out the window showed rain pouring down. Since we had a shorter day thanks to yesterday’s winds allowing us to ride those extra 25 miles, we didn’t need to get going quite as early.

Turned on the TV before heading to breakfast to learn that Jefferson City, the Missouri’s capital, had been hit by an EF3 tornado overnight! This city was about 100 miles west of us. No tornados in Eureka fortunately.

Had the motel-provided breakfast. Fay also snagged some bread from the breakfast area and made a couple of extra chicken sandwiches from our last night’s leftover chicken.

We had two good climbs fairly early after leaving the motel that were on the route this overcast morning. Alt Road, the first, was about a mile-long with over 300’ of elevation gain! The downhill on the other side was a delight! Turned onto State Route 109 to head to our next climb on Woods Ave. But, when we arrived, a worker there told us that this road, which he a just cleared with a small front-loader, still had a lot of mud crossing it. This was from all the rain from last night and then flooding the road!

One alternative was a tunnel pathway which led under SR109, but, we would’ve needed a submarine to navigate that tunnel!! Our other alternative (which was one ACA also mentioned) was to continue on SR109 for a couple of miles then turn east to get back on route. SR109 was a busy, uphill, 2-lane, north-south artery between Eureka and Ellisville and the roads leading eventually to St. Louis. Only about a 3’ shoulder allowed us to stay out of the traffic lane! But, cars and trucks were still whizzing by at 55mph or more!! There was also debris in our lane from the storm that we had to negotiate! Thankfully, we survived all that.

Our route brought us through Ellisville and onto Clayton Road (4-lanes) on which we would ride for over 16 miles that would take us all the way into St. Louis. Early on, the residences on Clayton Road were huge, brick, Colonial- or Tudor-style homes set on well-manicured properties. A lot of money in this area!!

(An example of the homes along the ritzy area of Clayton Road.)

About twenty-something miles into the ride, we took a break at a Starbucks. Had coffee and those chicken sandwiches Fay had made this morning. It was a nice break.

Getting closer to downtown St. Louis, our route brought us on the bike paths of Forest Park. A very nice and large park (the bike path around the park is over 6 miles long!!) which included the Missouri History Museum which we passed.

After the park, it was back on the city’s surface streets. We had to negotiate a short road closure (up on the sidewalk we went), over a bike/pedestrian bridge and onto the final road, Chouteau Avenue also a busy road, which took us to the Riverfront bike path and the end of this particular ACA map section (leaving only 1 more to go!).

The access to the bike path was blocked as we anticipated because of the past days’ rains, but, had hoped some of it might be open so that we could ride the ¼-mile or so to the famous Gateway Arch. Oh well, Google-mapped another route to get to the Arch.

(Our Google-mapped route to the Gateway Arch took us past the home of the MLB’s St. Louis Cardinals, Busch Stadium.)

You can purchase tickets for the tram that takes you inside the Arch all the way to the top for viewing. There are little viewing windows at the top of the arch for the visitors.

Finally, we Google-mapped our route to the residence of our tonight’s Warm Showers host, Roger, which was about a mile away from the Arch. He lived on the 9th floor of a building of upper floor lofts, mid-floor businesses, and, bottom floor shops. He buzzed us into the building (even though he wasn’t home!!).

It was our first time in a loft! What a neat place he had!! Lot’s of open space with plenty of floor-to-ceiling windows for lots of natural light. We had easy spots to put our bikes. He had said in an earlier communication that our room was to be his office/spare bedroom with its own adjacent full bathroom. What was wild about that room was it had no doors, but, two separate entryways! He had all sorts of information on a sheet on the table. His main point, “make yourselves at home.” That we did by getting stuff unpacked and showered!

Roger arrived home after we’d gotten refreshed and got the introductions out of the way. He offered us a choice of beverages along with cheese and crackers. We had lots of very enjoyable conversation, almost as if we’d known each other for a long time!

He took us up on our offer to take him out to dinner. But first, he wanted to show us around the downtown St. Louis area on foot. It was very easy to get around. Where his building is located is in the business area so after 5, there were not a lot of people around downtown. One of the places we walked to was a 2-block area called the Citygarden Sculpture Park. It had a lot of hands-on type sculptures which were very kid-friendly!

He also showed us other nearby historical buildings which included the old courthouse. 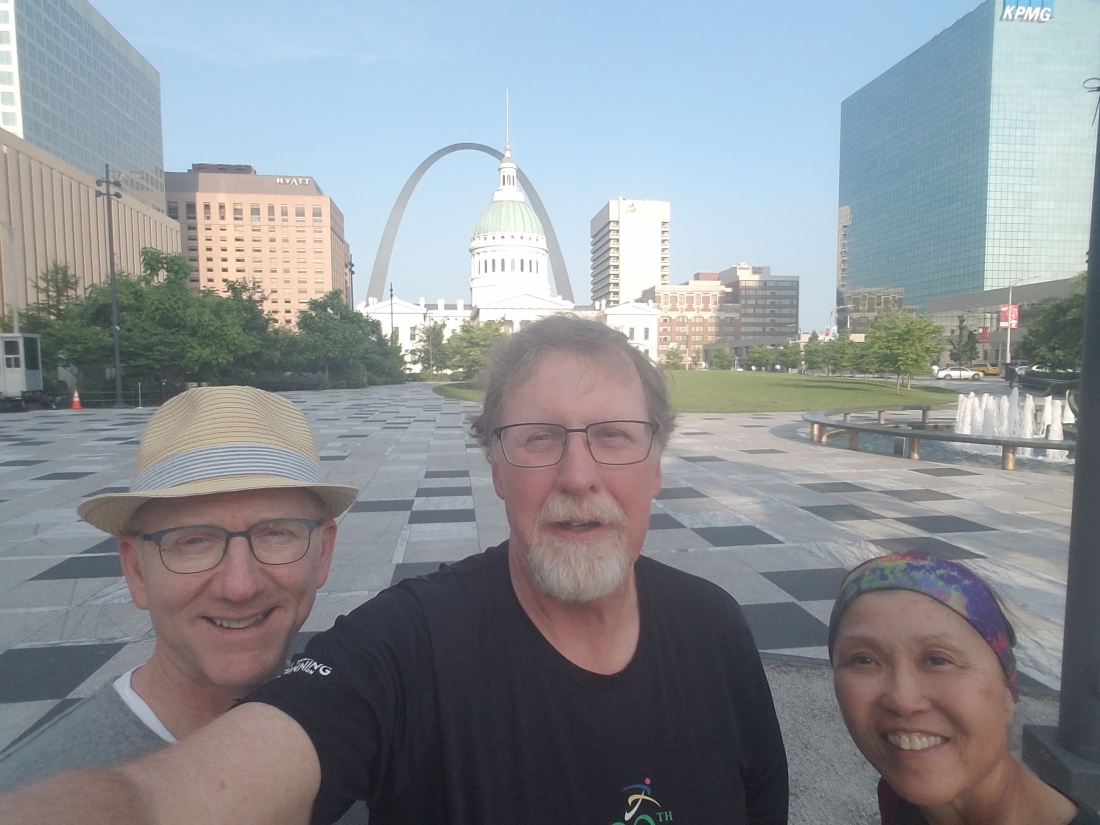 (The old Courthouse building with the Gateway Arch in the background.) 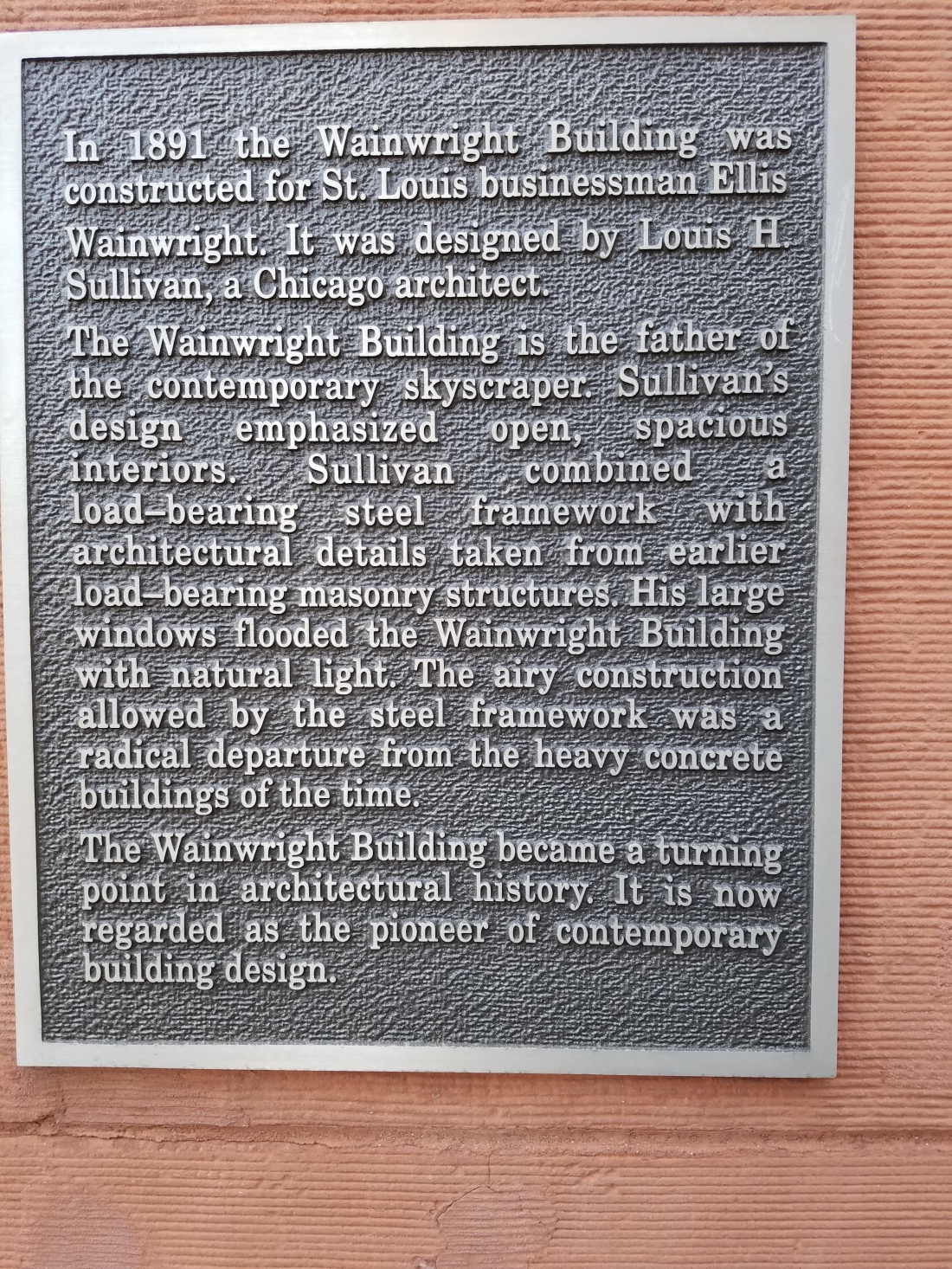 (The Wainwright Building and the plaque right on the outside of building itself.)

We had decided on Thai food for dinner beforehand and it was at short walk to the restaurant. An excellent meal where we shared 3 different entrees and a couple of appetizers. Each of us also enjoyed a nice, cold beer along with dinner along with more great conversation.

After dinner, walked a bit more downtown before heading back to his place as we wanted to drive to Crown Candy Kitchen for ice cream. But sadly, it was closed when we checked online. Oh well, he said that he had ice cream at home, but, before returning there, he drove us to a fun place call the “City Museum”. It used to be a well-known, old shoe warehouse. It was definitely not a museum, but, a welder’s delight!! It was like a McDonald’s kids play area, but on a more huge, whimsical scale with every “attraction” both inside and out made from recycled and repurposed materials: an old airplane fuselage, rebar, a Ferris wheel and a whole bunch of other things!! It was a play area for young and old!!

Back at Roger’s place, we had the ice cream with blueberries and raspberries! Afterwards, Fay helped Roger start “Kondo”-izing his place (as in Marie Kondo, “Tidy Up”)!! They had a ball doing some of his kitchen drawers!!

Somehow managed to squeeze in some route planning for at least tomorrow and the next day. Still keeping an eye on the weather as rain in the upcoming towns is in the forecast. We’ll figure that out. What a full day!!

Tomorrow, our originally-planned rest day will become a ride day with favorable winds!! We’ll leave Missouri and ride into our 8th and final state, Illinois.